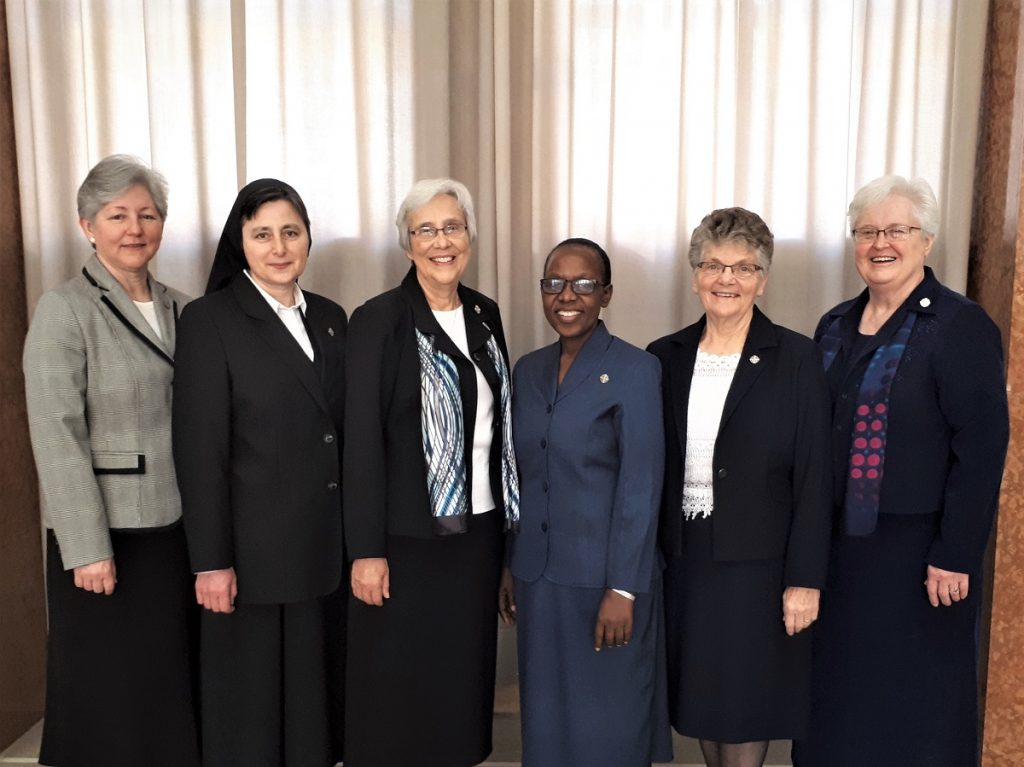 The  general council members began their six-year term when they are installed on 20 January 2018, at the Generalate in Rome, Italy.

Sister Roxanne Schares, general superior elect, will be the 12th successor to Blessed M. Theresa of Jesus Gerhardinger, the foundress of the School Sisters of Notre Dame. Before her election Sister Roxanne live in Nairobi, Kenya, and served as the temporary professed director for the Province of Africa which includes The Gambia, Sierra Leone, Ghana, Kenya, and Nigeria. Previously, Sister Roxanne was novice director for seven years; worked with the Jesuit Refugee Services in Africa for 10 years; and served as the International Shalom Coordinator (2007-2015) in Rome, Italy. Sister Roxanne entered the congregation in Mankato, Minnesota, USA, and was professed in 1972. She was missioned to Kenya in 1982 and is now a member of the Province of Africa.

Sister M. Martina Radež, general councilor is a native of Slovenia. Prior to her election, she served as local leader of the community at Ilirska Bistrica, Slovenia, as well as working in the Mother Theresa retreat center in Ilirska Bistrica. Previously, she served on the provincial council for three terms and in the formation of candidates, postulants, and junior sisters. She was a novice in the Bavarian Province and professed her first vows in 1980 in Munich, Germany.

The generalate staff,  which lives at the generalate, helps facilitate the work of the General Council as they seek to implement the directional statement and acts of the general chapter through specific roles.  Like all SSNDs, the sisters also form a faith community that gathers for prayer, faith sharing, and times of celebration and relaxation. Positions include House Coordinator, General Treasurer, General Secretary, Congregational Communications Coordinator, Secretary to the General Superior, Secretary to the General Council General, Food Service and refrectorian, Sacristan -Laundress, and International Shalom Coordinator.