In October 2019, the “Pan-Amazon Synod” was held in Rome. It was convened by Pope Francis with the theme “New Roads for the Church and for an Integral Ecology”. 35 women (religious, missionary, lay, and indigenous) had a particular role, participation and space. (See L’Osservatore Romano, Dec. 28, 2019)

“The climate was one of open, free and respectful exchange among bishops pastors in the Amazon, missionaries, lay people, and representatives of the indigenous peoples of the Amazon. We were witnesses participating in an ecclesial event marked by the urgency of the theme that calls for opening new paths for the Church in the territory. We took part in serious work in an environment marked with the conviction of listening to the voice of the Spirit.

“The Synod took place in a fraternal and prayerful environment. Sometimes the interventions were met with applause and songs, and there were deep contemplative silences throughout. Outside the Synod Hall, there was a noticeable presence of people from the Amazonian world who organized acts of support in various activities and processions, such as the opening when songs and dances accompanied the Holy Father from Peter’s tomb to the Synod Hall. The Way of the Cross of the martyrs of the Amazon had a major impact, as did the presence of a great number of international media.” (Final Document of the Amazon Synod, # 1).

Let us ask Mary, Mother of the Amazon, to watch over and protect all the women and children who live and suffer there and for the consecrated women who work and give their lives daily for the Gospel of Jesus Christ. May their lives and their dignity be respected, and may “the Triune God impel us into the heart of the world to be women of peace, hope, and love” (Directional Statement, 24th  General Chapter).

“The Pan-Amazon region covers more than seven and a half million square kilometres, with nine countries that share this great Biome (Brazil, Bolivia, Colombia, Ecuador, Peru, Venezuela, Suriname, Guyana and French Guiana) and the participation of seven Episcopal Conferences. …

“The population in this vast territory is approximately 34 million inhabitants, of which more than 3 million are indigenous belonging to more than 390 ethnic groups….

“In the Pan-Amazon region, priority must be given to the native peoples who live there. These people, as Pope Francis stated in Puerto Maldonado (19 January 2018), have never been so threatened as they are now. Secondly, attention [was] paid to the theme of the environment, ecology, and care for creation, our Common House. All this [was] presented in the light of the teaching and life of the Church, working in the Region.  …

“Although the theme refers to a specific territory, such as the Pan-Amazon region – and this is why we speak about the ‘Pan-Amazon Synod’ – the reflections that concern it go beyond the regional context, because they regard the whole Church and also the future of the planet. These reflections are intended to bridge to other similar geographical realities such as, for example: the Congo basin, the Central American biological corridor, the tropical forests of Asia in the Pacific, and the Guaranì aquifer system.”

Press Conference to present the Preparatory Document of the Special Assembly of the Synod of Bishops
for the Pan-Amazon Region (October 2019), 08.06.2018

“The Gospel text – ‘The Spirit of the Lord is upon me, because he has anointed me to bring glad tidings to the poor’ (Lk 4:18) – expresses a conviction that animates the mission of religious life in the Amazon, sent to proclaim the Good News and closely accompany the indigenous peoples, the most vulnerable and the most remote, based on a dialogue and proclamation that enable a profound knowledge of spirituality. Inter-congregational and inter-institutional relationships can help those in religious life to stay in communities where no one wants to be and with whom no one wants to be, learning indigenous languages and respecting their culture in order to reach the heart of the peoples.” (Final Document, #  97).

“The ancestral wisdom of the aboriginal peoples affirms that mother earth has a feminine face. The work of women in both the indigenous and western worlds is multifaceted: they instruct children and transmit faith and the Gospel, they inspire and support human development. The voice of women should therefore be heard, they should be consulted and participate in decision-making and, in this way, contribute with their sensitivity to Church synodality. We value the role of women, recognizing their fundamental role in the formation and continuity of cultures, in spirituality, in communities and families. Their leadership must be more fully assumed in the heart of the Church, recognized and promoted by strengthening their participation in the pastoral councils of parishes and dioceses, and also in positions of governance.

“Seeing the concrete suffering of women who are victims of physical, moral and religious violence, including femicide, the Church commits to defend their rights and recognises them as protagonists and guardians of creation and of our common home.” (Final Document, # 101-102)

In this month of March keep in mind and pray especially for indigenous women, migrants, refugees,  those who suffer, are mistreated, discriminated against, victims of violence … and for the consecrated women who support, defend and accompany them. 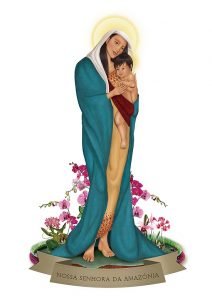 We conclude under the protection of Mary, Mother of the Amazon, venerated with various titles throughout the region. Through her intercession, we ask that the abundant life that Jesus came to bring into the world (cf. Jn 10:10) may reach everyone, especially the poor, and contribute to the care of our common home. (Final Document, # 120)

Image: Our Lady of the Amazon. Artist: Lara Denys 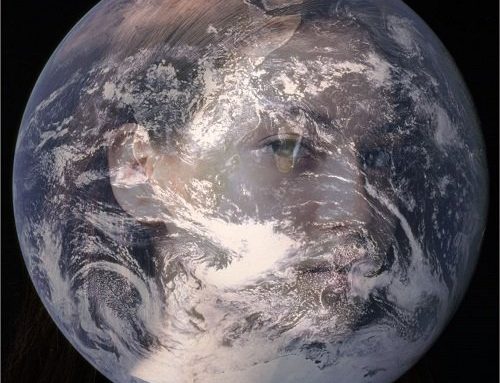 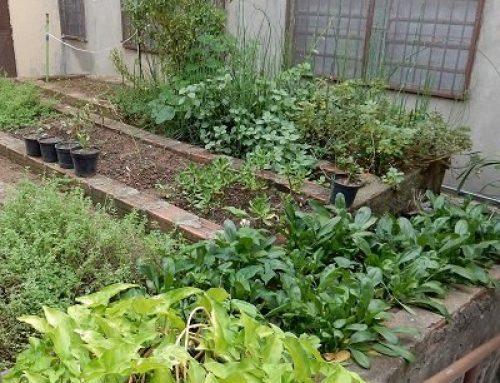 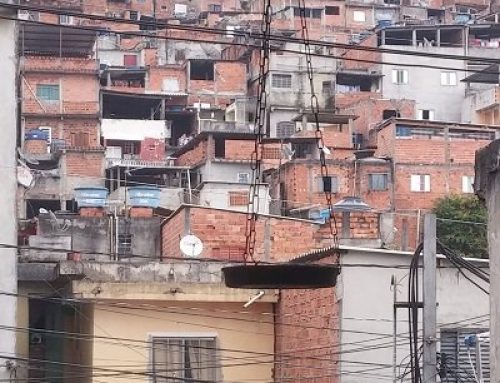 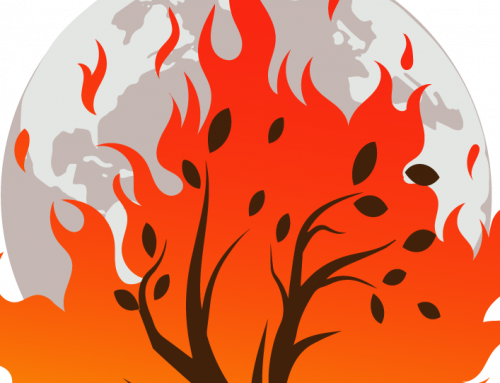