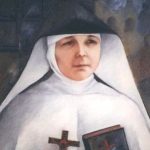 Sister Maria Antonina Kratochwil was beatified in the group of 108 Polish Martyrs of World War II (bishops, priests, religious, and laypeople) by Pope John Paul II in Warsaw, on 13 June 1999. The liturgical calendar celebrates Sister Antonina’s feast and the 108 Polish Martyrs each year on 12 June.

Sister Maria Antonina Kratochwil was born August 21, 1881, in Witkowice by Ostrawa where her parents moved in 1879 to find work. In 1885, they returned with their children to the mother’s homeland Węgierska Górka and then settled down in Bielsko.

During World War II, as a religious woman she was removed from school (the end of 1939); temporarily removed with her local community, the convent in Mikuliczyn (February 1940 – June 1941); and, on 9 July 1942, together with other sisters, she was arrested and put into prison in Stanisławów. There, in inhuman conditions (hunger, beating, torture, scoffing), she strengthened her sisters and lay co-prisoners by giving witness to Christian love, faith, and forgiveness

. Five days after release from prison, on 2 October 1942, she died as a result of torture and typhus.

Sister Antonina was a woman of deep faith, a wise and competent teacher, and a wonderful person. Sisters and laypersons who worked with her unanimously testified that Sister Antonina possessed boundless goodness and friendliness, joyful love of her vocation. True serenity and peace emanated from her. She loved children, especially poor and neglected children. In suffering, she had seen the grace to be like Christ.