Rose was born in 1586 into a noble family. As such, she was well educated and became adept in the skills of embroidery and working with flowers. As a young girl, she wanted to enter a convent but when her parents said no. she cut off her hair and using hot peppers damaged her skin.  Finally, in 1606 her parent allowed her to become a Dominicans of the third order. She was 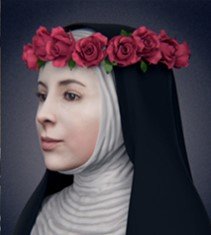 not allowed to join a convent.  As a compromise, she lived in he own hut in the family garden. She lived a very austere life.  She devoted herself to helping the sick and hungry. She used her

sewing skills to help raise funds for her family and the poor.

Rose of Lima was the first person born in the Western Hemisphere to be canonized by the Roman Catholic Church. She is recognized as the patron saint of Peru and South America. They are many skilled laborers who also claim her as their patron saint.  These include embroiderers, gardeners, and florists.