Skip to content
Home|Remembrance Day for Victims of National Socialism 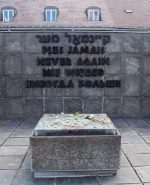 “27 January is Remembrance Day for the six million European Jews killed, the Sinti and Roma, the forced laborers, the prisoners of war left to starve to death, the people euthanized by the state, the homosexuals, all those who, for religious, political or simply humanitarian reasons, stood against the reign of terror and so fell victim to the strictures of the totalitarian regime.” Blessed Sister Maria Antonina Kratochwil and many other School Sisters of Notre Dame suffered under the repressive regime.  Some were imprisoned, tortured, and died. Others saw the schools that they had called their own since 1833,  taken from them and their students taught what the Nazis believed to be the truth. This day of remembrance is a reminder that if we refuse to learn from the past, we are destined to repeat it. Remembrance Day for the Victims of National Socialism