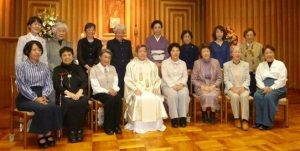 The Emergence of Associates

Following Vatican Council II, the sisters in the Polish Province formed a group of laywomen, known as the Daughters of Mary, who shared in the apostolic ministry of the sisters. In 1969 they shared information about their experiment during the first session of the General Chapter. The following year, during the second session of the Chapter, the delegates accepted the concept of affiliation. The congregation thus allowed for further study of this proposal to admit Catholic laywomen in a formal relationship in the congregation. In 1974 the St. Louis Province presented a formal proposal which the 15th General Chapter approve.

The first associates were received in 1976 in the St. Louis Province.

The associate movement continues to grow and develop in the North American Major
Area. The regions of Guam and Japan have associates.

Photo of Associates from Japan.