Our Commitment to Addressing Racism

We commit to challenge policies and practices that promote or perpetuate racial bias, while also learning about and confronting our issues of racial bias and our complicity in supporting or maintaining racially discriminating practices.  – SSND Central Pacific Province Immigration Corporate Stance

In this divided and wounded world, recognizing and addressing systemic racism and racial bias is essential if we are to witness to and reveal the oneness for which Jesus Christ was sent. In order to promote deeper reflection and meaningful action, three paths for sustained engagement and accountability have been identified and are being pursued. 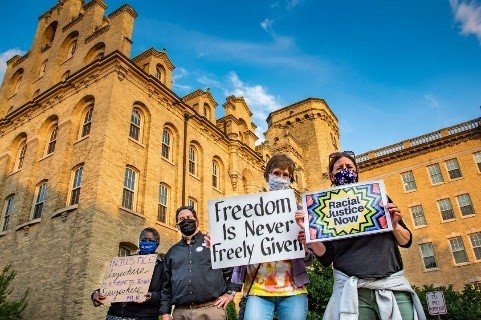 We also affirm the 2016 Leadership Conference of Women Religious Resolution on Racism. Links to SSND and other dismantling racism resources can be found here. 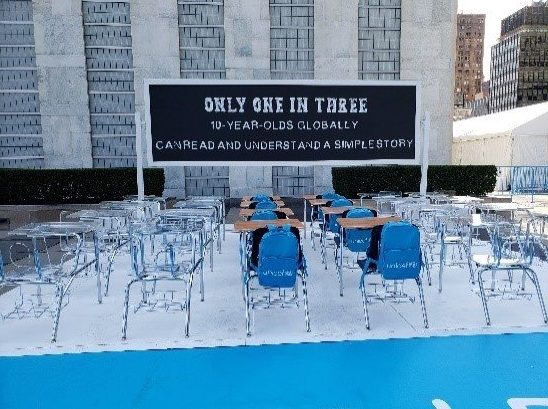 School Sisters of Notre Dame Beatriz Martínez-García (Director of the SSND UN-NGO Office) and Ann Scholz joined civil society advocates, education experts, and world leaders September 16-19 to address the global crisis in education – one of equity and inclusion, quality and relevance which is having a devastating impact on the futures of children and youth.  The United Nations Transforming Education Summit provided an opportunity to elevate education to the top of the global agenda and to mobilize solidarity and solutions to transform education in a rapidly changing world.

It is estimated that 64.3% of 10-year-olds are unable to read and understand a simple story; 840 million young people will leave school unprepared for the workplace of the future. Yet less than half of the countries have strategies to address this crisis.

“Instead of being the great enabler, education is fast becoming the great divider,” stated the UN Secretary-General António Guterres. “The rich have access to the best resources, schools, and universities, leading to the best jobs, while the poor – especially girls – face huge obstacles to getting the qualifications that could change their lives.”

The Summit yielded significant new commitments on foundational learning, digital connectivity, and financing. Promises by 130 countries underscored the role of education in achieving the Sustainable Development Goals and its critical importance in addressing the climate crisis, conflict, gender inequality, and poverty.

Participants echoed the sentiments of the Secretary-General who insisted, “We must push forward together, with a focus on tangible actions where it matters most: on the ground, in the classroom, and in the experience of teachers and learners alike.”

Girls are ready to accelerate history and to move our countries forward. Some have taken leadership in promoting a future with hope for climate change, widespread educational opportunities for all young women, and safe environments in which to study and work.

Malala Yousafzai, a Pakistani activist for female education and, at age 17, the youngest Nobel Prize Laureate (2014), founded an organization to ensure 12 years of free, safe, and quality education for every girl. Her efforts began in Pakistan and  have expanded to other parts of Asia, Africa, and Latin America. Today, girls are standing up for their right to learn, despite enormous obstacles, across the world.   (Photo source: Wikimedia)

Greta Thunberg, a Swedish girl and environmental activist, born in 2003, is known for challenging world leaders to take immediate action for climate change mitigation. Greta gained notice for her straightforward and blunt speaking to political leaders.  She criticized world leaders for their failure to take action in addressing our climate crisis. After Greta addressed the 2018 United Nations Climate Change Conference, student protests took place throughout the world and they continued in the following years. (Photo source: Wikimedia)

Emma Gonzalez, born in 1999 in Florida, USA, is an American advocate for gun control.  In 2018, she survived the deadliest high school shooting in Parkland, Florida. In response, she co-founded the gun-control advocacy group March for Our Lives and quickly rose to fame becoming the American face of anti-gun violence. In a speech given in Washington, she began by listing the names of the 17 students and staff who were gunned down in her school. She then remained silent for 6 minutes and 20 seconds in order to show how it felt to crouch in a classroom while a murderer carried out his shooting spree. (Photo source: Wikimedia)

In adversity, these three girls have exhibited resourcefulness, creativity, tenacity, and resilience. We look forward to experiencing the rewards of their work and foresight.  Hopefully, we can invest in a future that believes in their leadership and potential.  The International Day of the Girl, celebrated October 11 each year, supports further opportunities for girls and increases awareness of worldwide inequality faced by girls based on their gender.

Season of Creation: a Kairos moment in our school

By Sr. Paola Baliño, SSND (Province of Latin America and the Caribbean)

This is the second year that we have celebrated the Season of Creation at SSND St. Joseph’s School in San Javier, Argentina, with an interdisciplinary project involving both the kindergarten and the primary levels of the school. 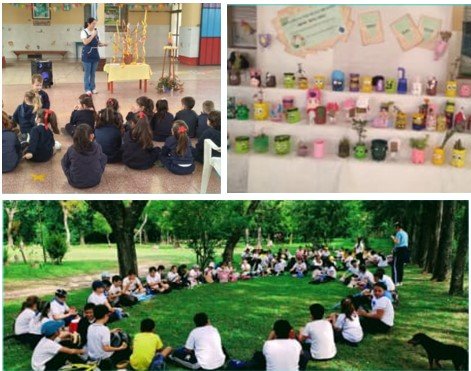 Prayer, contemplation, reflection and action with the students

The remote preparation began with the celebration of Laudato Si’ Week. Later, when we received Pope Francis’ message about the Season of Creation, we formed a committee with teachers, the educational pastoral team, and the expressive arts areas to design the project. The Season of Creation activities began with prayer on September 1 and culminated on October 4 with an exhibition of all the works. This was a great celebration open to the local community.

The project focused on three areas: celebrative-liturgical, practical action, and awareness raising. At the beginning, it seemed difficult, but later, the creativity and quality of the proposals offered real opportunities for significant learning. The joys outweighed the difficulties, especially when we observed the changes in the children in relation to their experience of integral ecology. Working on this project motivated us to heal wounds, to grow in gratitude to God the Creator, to be conscious, responsible, and respectful of all that surrounds us. We began to live knowing that all Creation is a gift and taking care of it is our task.

We have made these commitments:

A transformation we experienced was that, as we closed this Season of Creation, we were already beginning to dream of the next one!

Risk opening ourselves to be transformed

by Sisters from Magnificat Community in Nowy Sącz (Polish Province)

At this critical turning point in the sacred history of creation, of humanity, and of our congregation, choice for life demands that we risk opening ourselves to be transformed: to surrender, to transcend ourselves, and to act (Cf. Circ.18/21). As SSNDs, we chose to choose life by welcoming refugees from Ukraine.

On March 15, 2022, a family came to live with us: grandmother, Zirka; mother, Tania; and her 8-year-old son, Dawid. Shortly after the war began they fled Ivano-Frankivsk, Ukraine (former Stanisławów), where our Bl. Sister Antonina Kratochwil was imprisoned and then died (1942). We knew it was no coincidence. This was her gift to us for this time. 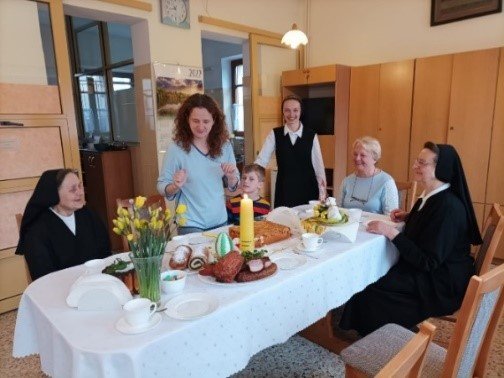 We celebrated Easter together.

Despite the difficult experiences of migration, Zirka and Tania lived with us and our house became full of life and joy. They cooked, baked cakes, cleaned, and helped in the garden. They let us experience that building the future with migrants and refugees also means recognizing and valuing how much each of them can contribute to the process of construction (Pope Francis). Zirka, a retired doctor, gave us good medical advice. Tania began to learn Polish and took occasional jobs to cover expenses. Dawid attended online classes and learned English, with the help of one of our Sisters. Zirka and Tania listened about the events in Ukraine, talked to their husbands who remained there, and hoped for a quick end of war.

Since Tania had to return to work and hearing that her city was safe, they decided to return home. However, after several weeks of an exhausting stay in Ukraine, they flew to the USA to be with Zirka’s second daughter. Tania is still looking for a job. Zirka looks after Dawid and wants to return to Ukraine in January. We keep in contact with them, knowing that our Lord made us his bearers of hope so that confidence in the future may be reborn.

by Sr. Lucy Waigwa, SSND, Teacher/Counsellor in the Gambia (Province of Africa) 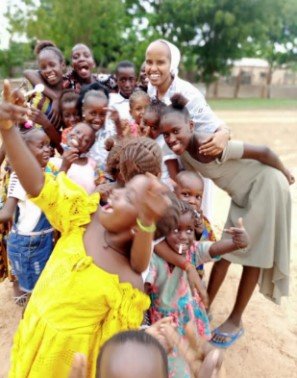 Sister Lucy Waigwa and her students

Education of girls is compromised in the Gambia, especially in rural areas where greater value is placed on marriage than on education. Early marriages and teenage pregnancies have led many girls to drop out of school. Many girls in the Lower Basic School who are “early bloomers” fail to come to school due to lack of access to sanitary towels and the stigma of being laughed at by their male colleagues.

The role of boys as future bread winners results in some families pushing their teenage boys to embark on dangerous journeys to Europe and America in search of wealth so as to provide for their families. These boys abandon education and are trafficked as child laborers in different parts of the world.

Many students join Junior Secondary School with a poor reading foundation. It is difficult to find teachers who have specialized in Math and Science, resulting in low student performance. Basic education is free. However, there are other charges such as fees for extra remedial classes, textbooks, and uniforms which keep poor children out of school.

Students whose families rely heavily on agriculture for their livelihood do not go to school during the rainy season and miss covering the syllabus.

The overall effect is that the number of school dropouts has drastically increased in spite of the free primary education offered by the government.

The 2022 theme is focusing on how rights are the beginning of peace within societies, and a way to create a fairer society for future generations.  Human rights aim to promote safe and equal rights for all human beings regardless of race, color, religion, sex, language, political or other opinion, national or social origin, property, birth or other status.