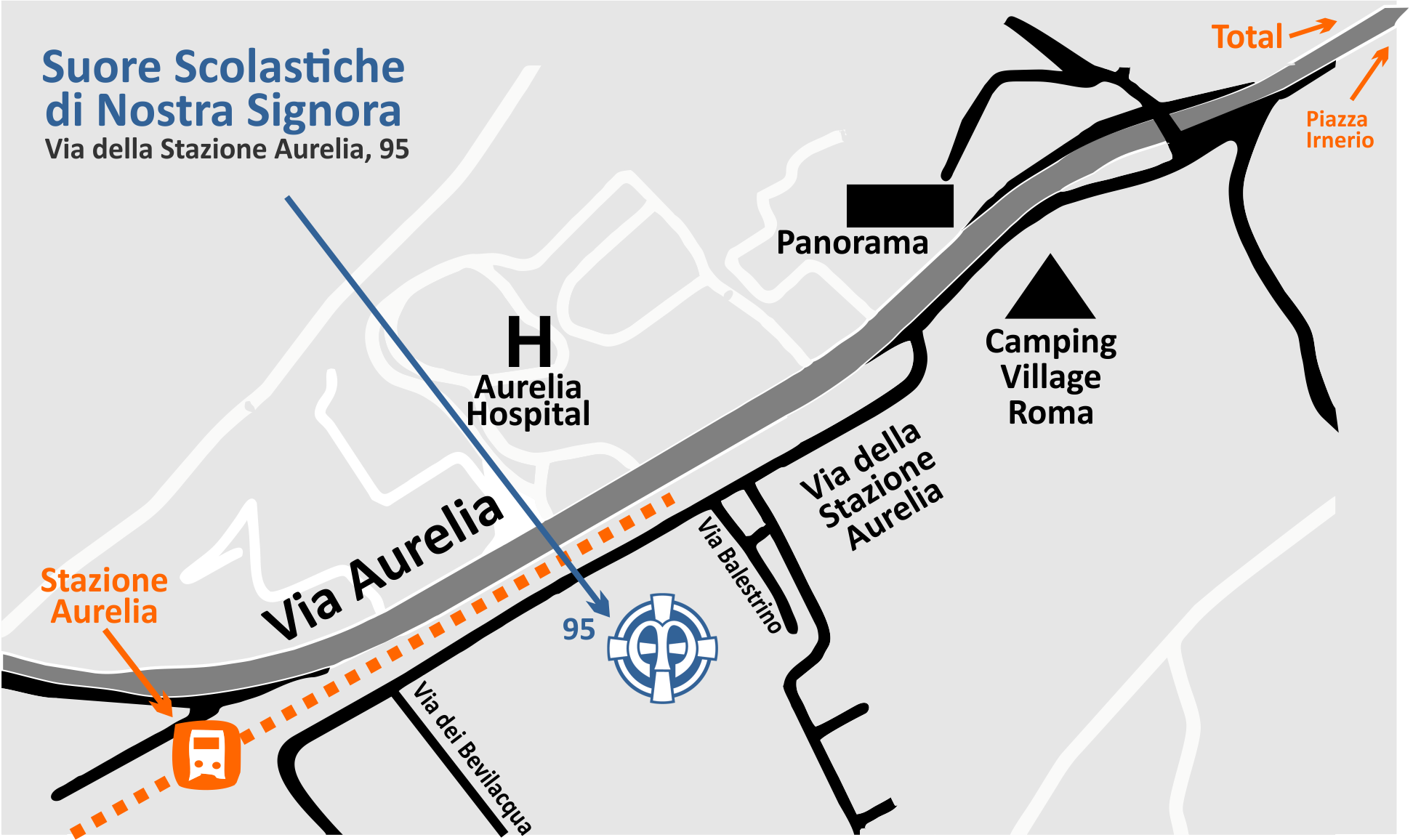 Directions in Italian to give to taxi driver:

If you are driving down Via Aurelia in the direction of the GRA coming from centro, you pass by the Fratelli Cristiani (Christian Brothers) on your right, a Total gas station on the right etc.

Take the ”inversione di marcia”  which also goes to the Panorama department store. At the top, turn left to cross over Via Aurelia and take an immediate RIGHT at the end of the bridge to go down the ramp.
At the bottom, you will see a sign for Via della Stazione Aurelia straight ahead of you and a little to your left. Turn left onto it and continue to our gate # 95.
If you are coming from the GRA, take USICITA #1 in the direction of Città del Vaticano.
AFTER the exit for Stazione Aurelia, take the next exit, making an immediate right turn onto Via della Stazione Aurelia. Come down to #95 which is on your left.

#247 from the Cipro Station or #246 from Circonvolazione Cornelia or either one from in front of the Fratelli Cristiani (Christian Brothers) on via Aurelia. (Note: Cotral busses also stop at Fratelli Cristiani and again at Panorama. You need to flag them down.)
Get out at Panorama (Aurelia). Both busses stop there. (Note: the 247 also stops at the train station Stazione Aurelia. This is the end of the line for it.)
The pedestrian bridge over Via Aurelia is now in use again. Once you have crossed the highway using the pedestrian bridge, continue straight until you can turn left  onto Via della Stazione Aurelia.
Walk along Via della Stazione Aurelia to # 95 which is on your left. The walk from the bus stop to the gate is about 10 minutes.
By Metro:
Red line (A) to CORNELIA.
Exit first in the direction of Piazza Irnerio and then Via Aurelia.
If you’ve taken the right exits, you will be emerging from the Metro very near a McDonald’s – straight ahead of you at the end of the block. (If you didn’t manage to do this, ask where McDonald’s is because you won’t see it. There is only one McDonald’s in this area.)
Walk around the corner of McDonald’s and down to the Fratelli Cristiani (Christian Brothers) across from Mercato Irnerio on Via Aurelia. There is a bus stop there for #246, #247 and Cotral busses.
Follow directions “By bus” as above.

The train that stops at ROMA AURELIA is the Regionale that runs to Civitavecchia from Termini. Our station – ROMA AURELIA – is the first stop after SAN PIETRO.
Exit the tracks in the direction of the factory buildings – not toward the station. The street in front of the factories is Via della Stazione Aurelia.
Walk back in the direction the train has just come to our gate – # 95 which is on the right. It’s about a 10 minute walk.
Page load link
Go to Top