To print a copy of this document just click on the following link: Pdf to Print 286 KB

A home for all? Renewing the Oikos of God” 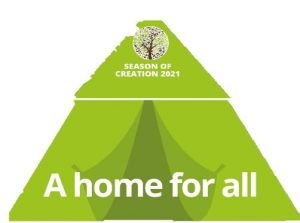 With the climate emergency and ecological crisis continuing to evolve to dangerous levels, we hear an even more urgent call to unite our prayers and actions with a belief in the power of transformation. We come together as one human family renewing the oikos of God for the 2021 Season of Creation, September 1 to October 4. In this year‘s theme we celebrate the integral web of relationships that sustain “a home for all”. Personally and communally, we are invited to pray and act wherever we live and minister.
Sadly and painfully, we are witnessing increasing destruction of habitats and destabilization of ecosystems. This results in the loss of lives and a threat to our living together. We have millions of our brothers and sisters forced to flee their homes because of climate insecurity, conflicts, and poverty. Countless people in our world do not have a decent oikos to be and live in. Pope Francis warns us ”We are not faced with two separate crises, one environmental and the other social, but rather with a complex crisis that is both social and environmental. Strategies for a solution require an integrated approach to fighting poverty, restoring the dignity of all life.”(Laudato Si’ #139)

The celebration of Laudato Si’ fifth anniversary has made us even more aware of the urgent need to ensure a dignified home, a safe “oikos” for all creatures, so that life in our common home will endure. The cry of creation and the cry of the poor call us to a personal and communal ecological conversion that brings about a profound transformation of heart and mind. It also requires economic, social, educational, political, and technological solutions that are rooted in a

vision of justice .and wholeness The hope is that this Season of Creation will strengthen ecumenical unity to act and advocate for the care of all life as we engage deep into the bringing Laudato Si’ to life. May this sacred time inspire and encourage us to take responsibility for the work of renewing the oikos of our Creator God. May we educate, advocate and act in collaboration with others for the dignity of all life, ensuring that all have a home to live in and flourish. Our commitment to embark on a seven-year journey as a Laudato Si’ Congregation towards integral ecology is one more opportunity to give our best contribution to change the course of our history.

A Commitment to care for our home

As we learned about and reflected on the reality of our biodiversity, we became aware of the urgent need to take a proactive stance of actions and attitudes that transform the reality where we live. Inspired by “Biodiversity” decade, Laudato Si’ Week and the actions of Mr. Hélio da Silva who planted more than 33,000 trees, we promoted a webinar with Mr. Hélio to learn from him. His commitment and perseverance made him the creator of the first Linear Park of Sao Paulo and the fifth in the world. This motivated and challenged us as educators and students to engage in the mission of caring for and preserving the habitat where we live in, our neighborhood and city. Pope Francis says, “environment is a collective good, the patrimony of all humanity and the responsibility everyone”. (Laudato Si’ #95) We, educators of the Colégio Nossa Senhora das Dores, Säo Paulo-Brazil, committed ourselves to reflect on:

Moved by the testimony of Mr. Hélio, a person who overflows with light and love through his concrete actions, the students felt encouraged to take up the certain actions and practices for their ongoing education action in dealing with the challenges in Sao Paulo:

Taking care of the planet and preserving biodiversity is a commitment for all of us! 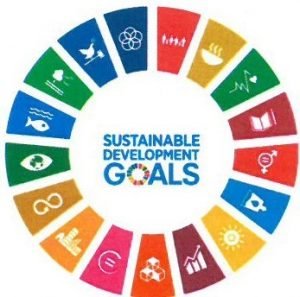 In 2015 all the Member States of the United Nations unanimously adopted the 2030 Agenda and the Sustainable Development Goals (SDGs) in which they committed to ensuring that no one is left behind. Every year since 2016, it is the process of the UN that some countries present their Voluntary National Reviews (VNRs).The countries report how they are integrating the SDGs into their national development plans, and how that integration has improved the quality of life
of their inhabitants and the environment.

This year’s High Level Political Forum (HLPF) was held from July 6 to 15 2021. On the last three days, 44 countries presented their VNRs, including the Czech Republic, Germany, Guatemala, Japan, Paraguay, and Sierra Leone. (To read the content of these reports, click on the country name.)
Shalom News Letter August 2021 3

For the second consecutive year, the HLPF was virtual. A delegation of 12 sisters and 4 associates from the Provinces of Africa, Latin American and the Caribbean, Atlantic-Midwest, and Central Pacific represented us. This year’s HLPF will focus on the following SDGs, 1, 2, 3, 8, 10, 12, 13, 16, and 17.Since the adoption of the 2030 Agenda and the SDGs, we may ask how SDGs are related to our SSND ministries.

2021 International year for the elimination of child labour

The United Nations General Assembly declares international years to raise awareness of global issues, such as child labour. The

International Labour Organization (ILO) defines child labor as the type of work that deprives children of their childhood, their potential and their dignity, and that is harmful to physical and mental development. Child Labour: Global estimates 2020, trends and the road forward reports that 160 million of children are involved in child labour; 63 million of them are girls and 97 million are boys. 79 million of these children perform hazardous work that can result in permanent disability, ill health, and psychological damage.

The ILO has adopted two conventions to stop child labour: Convention 138 establishes 15 as the minimum age for work in general and Convention 182 legally prohibits the worst forms of child labour.

The clock is ticking. The Sustainable Development Goal Target 8.7 calls Member States, private and public sector and civil society organizations to take immediate and effective measures to end child labour in all its forms by 2025. We can contribute to stopping child labour by consuming products not made by their forced work.

Recovering better for an equitable and sustainable world

This is the 2021 theme for the 54th International Day of Peace. Pope Francis, in his message for the celebration of this day, affirmed that for peace to be a reality in us and among us, it is extremely necessary to create a culture of care. “The culture of care thus calls for a common, supportive and inclusive commitment to protecting and promoting the dignity and good of all, a willingness to show care and compassion, to work for reconciliation and healing, and to advance mutual respect and acceptance. As such, it represents a privileged path to peace.” World Day of Peace January 1 2021 (#9) “In many parts of the world, there is a need for paths of peace to heal open wounds. There is also a need for peacemakers, men and women prepared to work boldly and creatively to initiate processes of healing and renewed encounter “. ( Fratelli – Tutti #225 )
The pandemic has gone hand in hand with the increase in stigmatization, discrimination and hatred, which has only decimated more lives instead of saving them. To struggle and rid humanity of this common enemy, we must feel in our heart that we are not each other’s enemies. We are all fratelli and sorelle, belonging to the same human family. In order to recover from the devastation and hurts caused by the pandemic, we are called to make peace and build bridges of reconciliation with each other. We can bring peace by confronting acts of hate and spreading compassion, kindness and hope.

The year of the Jubilee of the Earth has called us to make peace with nature. Despite travel restrictions and economic cuts, the climate crisis is not on pause. It demands climate justice, for a greener world, fair-trade policies and a sustainable global economy that produces jobs, and reduces emissions.

The sustainable development goals in the SSND life 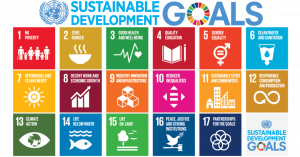 Our 24th General Chapter calls us to embrace Gospel Poverty and risk opening ourselves to be transformed. The 17 Sustainable Development Goals are designed to transform our world by ensuring people enjoy peace and prosperity, while at the same time protecting our planet. In 2019, Amina J. Mohammed, Deputy General, at the “Decade of Action” states: “The SDGs demand a transformation of economies, societies, and human behaviors. This transformation will not happen unless people across the world are aware of the Goals, see their own concerns in the Goals, and know what they can do to implement the Goals.” How do we SSNDs allow the SDGs help us be transformed? How do the SDGs influence our daily lives? 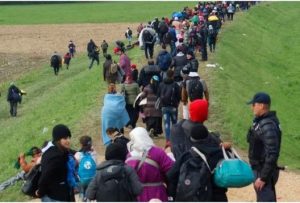 Towards an ever wider “we”

Every year the World Day of Migrants and Refugees is the last Sunday of September; in 2021 it will be celebrated on September 26. The title for his annual message, the Holy Father has chosen Towards an ever wider “we”. (Pope’s Message for the 2021 World Day of Migrants and Refugees.) May we find ways to let the tent of our heart widen for vulnerable people on the move.

Prophetically, we commit to educate, advocate, and act in collaboration with others for the dignity of life and the care of all creation.