The School Sisters of Notre Dame is an international congregation of more than 2,000 women religious in 30 countries. Their mission, to deepen communion with God and among all people, is lived out in ministries focused on education. They educate with a world vision believing that the world can be changed through the transformation of persons. The congregation, founded on October 24, 1833, by Blessed M. Theresa of Jesus Gerhardinger in Bavaria, Germany.

To enable us as a faith community to respond to God and to minister effectively, we establish governmental structures that free us for the ways of the Spirit. Our government flows from and animates our shared life and mission.

Our governmental structures at the local, provincial, and international levels provide for the participation of each member and for the exercise of authority.

We share Mother Theresa’s conviction that for our congregation central government strengthens us in our proclamation of the good news and is indispensable for fostering unity. 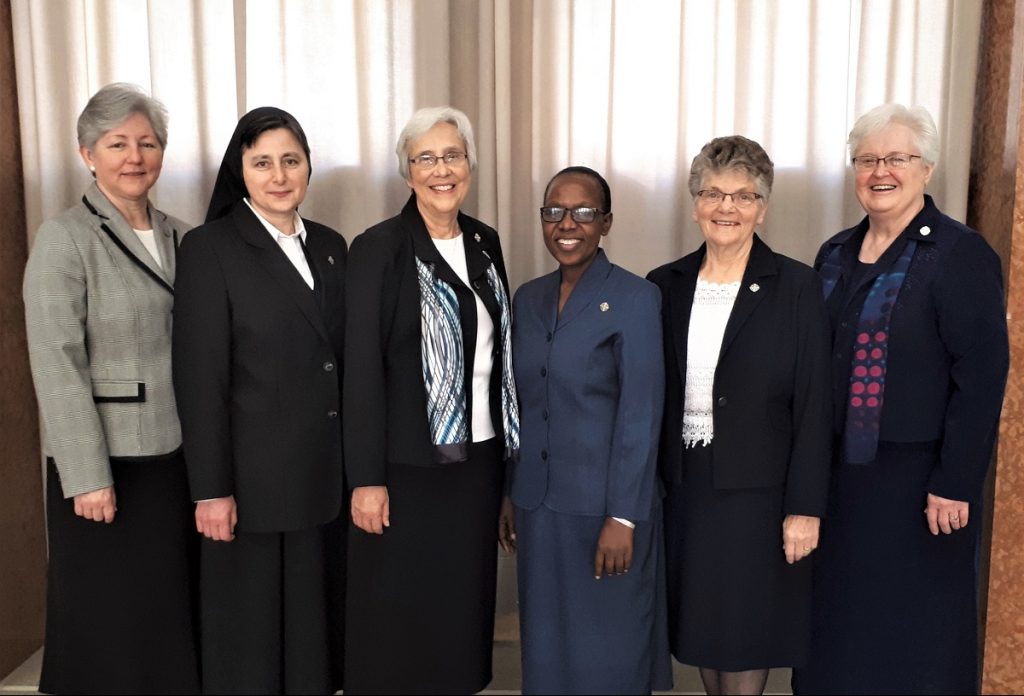 The  general council members began their six-year term when they were installed on 20 January 2018, at the Generalate in Rome, Italy.

Sister Roxanne Schares, general superior, will be the 12th successor to Blessed M. Theresa of Jesus Gerhardinger, the foundress of the School Sisters of Notre Dame. Before her election Sister Roxanne lived in Nairobi, Kenya, and served as the temporary professed director for the Province of Africa which includes The Gambia, Sierra Leone, Ghana, Kenya, and Nigeria. Previously, Sister Roxanne was novice director for seven years; worked with the Jesuit Refugee Services in Africa for 10 years; and served as the International Shalom Coordinator (2007-2015) in Rome, Italy. Sister Roxanne entered the congregation in Mankato, Minnesota, USA, and was professed in 1972. She was missioned to Kenya in 1982 and is now a member of the Province of Africa.

Sister M. Martina Radež, general councilor is a native of Slovenia. Prior to her election, she served as local leader of the community at Ilirska Bistrica, Slovenia, as well as working in the Mother Theresa Retreat Center in Ilirska Bistrica. Previously, she served on the provincial council for three terms and in the formation of candidates, postulants, and junior sisters. She was a novice in the Bavarian Province and professed her first vows in 1980 in Munich, Germany.

The directional statement was the result of a congregation-wide consultation before the Chapter and intense dialogue and prayerful reflection during the Chapter. It is shared on the congregational website in the languages of the different provinces . The general council leads the congregation in implementing the Spirit-inspired direction set by the Chapter members.

The generalate staff  majority of whom live at the generalate, helps facilitate the work of the General Council as they seek to implement the directional statement and acts of the general chapter through specific roles.  Like all SSNDs, the sisters who live in Rome, form a faith community that gathers for prayer, faith sharing, and times of celebration and relaxation. Positions include House Coordinator, General Treasurer, General Secretary, Congregational Communications Coordinator,  Secretary to the General Council General, Food Service and Refrectorian, Sacristan-Laundress, and International Shalom Coordinator and UN-NGO who resides in New York, USA.

We are organized into 10 administrative units called “Provinces”:

Learn more about the provinces

“Many things have changed in the history of our congregation, but neither political revolutions, persecution and suppression, nor radical social, philosophical, or theological developments have been able to destroy our unity. … Over the years we have become diversified in our externals and lifestyles, yet remain united in the essential of our religious life. The fact that the diversity in dress, name, lifestyle, and traditions does not separate us reflects the vitality of our spirituality.” (Mirroring Our Charism, 2007)